So, after an hour playing with a GR-33, and realising that my technique (after a decade of playing with my fingers as Lindsey in Fleetfoot Mike) really wasn’t as sloppy as I thought, Chris (whose GR-33 it was) suggested I borrow it and his Godin, and use it in the show. Which would be fine for the ‘extra synth lines’ problem, but was still going to require some form of multi-effects/amp sim for the various guitar sounds I needed.

Time to do some research… 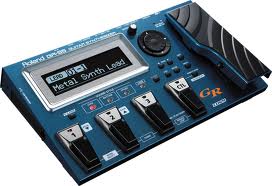 …which actually didn’t take long at all, as the Roland GR-55 sort of smacked into the middle of my radar in about two Google searches.

For those who don’t know, the  GR-55 is basically a GR-series synth and a VG-series COSM-modelling guitar/FX/amp unit in one box, using a GK-3 or similar pickup. You can blend the original guitar pickups, a modelled (à la Variax/VG-99) guitar sound, and two PCM synth sounds (voice generation circuitry from the Roland SD-90), and control the result with the control and expression pedals on the floor unit.

So I bought one.

Usefully, Chris had a spare GK-3, so I didn’t buy one of those. So you can imagine my surprise when the parcel I’d ordered arrived, and proved to contain the version with the GK-3. Even nicer, Dolphin Music, when contacted, basically said ‘keep it’. So I have my own GK-3 and a spare when I want it. The pickup went, with the E-serial Squier Strat belonging to a late and much-missed friend, to my local guitar tech for installation and much-needed setup. It came back a week or so later, by which time I’d temporarily fixed the other GK-3 to my Chinese Squier Strat, and had a play

As you’d probably expect, the GR-55 suffers a bit from ‘gosh wow’ presets. There are a good few that have me going ‘why on earth would I ever use this in a musical context?’, but then I guess that does depend on what musical contexts matter to you. A lot of the presets use the PCM synth voices to add texture to guitar sounds, which range from te useful to (again), the ‘WTF??’, and some are straight emulation. Cards on the table now – it’s Roland’s COSM modelled virtual guitar and sounds: if you don’t like these for whatever reason, you won’t like the modelled sounds on the GR-55. If your quest is for a wide range of different guitar sounds in the context of multi-layered arrangements with keys and more guitar, you’re probably going to be in heaven.

Having said that? The modelled acoustics aren’t at all bad: I could achieve a convincing 12-string sound I needed for one song very quickly, and layering a pad on a modelled Strat produced some very effective sounds.

Problems? I had a few, which I’ll cover in the next set of posts:

First up, out of the box, the GK-3/GR-55 and my technique did not get on – I was getting spurious notes from touching strings right left and centre. Trust me, though, this is normal. The GK-3/GR-55 combination needs setting up to match your playing style, and if you don’t do that, you will pretty much have wasted your money. More on that in the next post.

Secondly, the GR-55 is quite a small foot unit – its patches are grouped in banks of three, and it has three patch select pedals, a ‘control’ pedal, and an expression pedal. and that’s all. The three patch pedals do double duty as a tuner select (press 1 & 2 together) and bank up/down (press 2 and 3 together), and there’s also bank up/down switches on the GK-3 itself. However, when (like me) you’re going through three and four patches a song, the amount of tap-dancing that can cause is scary. Again, I’ll cover how I worked round that in another post.

Thirdly, the GR-55 is a bit fiddly to edit. There is a brilliant shareware editor available for it, and I’ll look at that in another post as well.