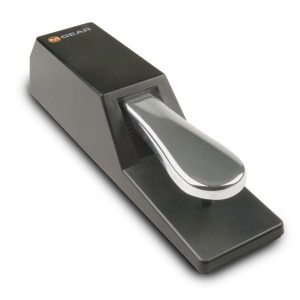 I just got asked a question about this, so I thought I’d write it up, since it appears to be not something that yields easily to Google searching.

Basically, the question was how do you setup a hold, sustain or damper pedal on a keyboard? (I tend to call them sustain pedals, but manufacturers seem to chop and change, sometimes on their own kit – in fact, my wife’s Roland XP-80 calls it ‘hold’, and her (two decades newer) Roland VR-09 has it labelled “damper”.)

Either way, the real question is which polarity do you need – should it sustain when the pedal switch is closed, or when the contacts are open? Pedals can be built either way, so that standing on the pedal opens a switch, or closes a switch. Again, there isn’t a standard. Among the major manufacturers, Roland and Yamaha expect the contact to be closed until you tread on it, Casio and Korg the reverse. For some manufacturers (Nord for one) it’s changeable via a Settings menu.

What this means is, if you plug the wrong kind of pedal in, then your notes will sustain all the time until you tread on the pedal, rather than when you do. Which is why the likes of M-Audio and others make pedals with a polarity switch, usually a little slider on the back. If your pedal works ‘backwards’, just flip the switch. Sorted.