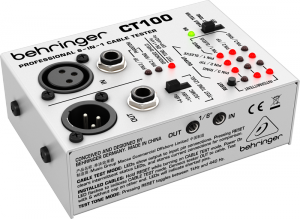 Opinions on Behringer seem to vary widely, but there is, I think, no doubt that some of the pieces of kit they produce are both really useful and incredible value-for-money. The CT100 is a case in point, as it is, in my opinion, a pretty essential addition to your gig bag.

It does, pretty much, do what it says on the box: test cables. To be more specific, there are a range of sockets on the box: a pair labelled “In” and “Out” for each of 3-pin XLR, 1/4″ stereo and mono jack, 3.5mm stereo/mono jack (why Behringer calls these 1/8″ I’m not exactly sure), 5-pin DIN (MIDI – pins 2,4,5 only) and RCA phono. You aren’t restricted to using both of a pair, either, so you can freely, for example, check out a male XLR to balanced jack cable.

Once you turn it on and plug in the cable to be tested, there’s a 3×3 matrix of LEDs that lights up showing which inputs and which outputs are connected: it doesn’t take long for you to figure out which pattern of LEDs is ‘OK’ and which shows a cable’s cross-wired, or dead. (As an aside: I found this really useful when we came to re-commission our church PA, as it transpired that the third-party mod to our old mixer had some interestingly non-standard wiring on its XLR outs, and the cables that were provided with it were equally interestingly strange!)

It doesn’t stop there, though – ever been plagued with a cable fault that comes and goes? The CT100 will handle that too: there’s another set of three LEDs marked ‘Intermittent’ next to the 3×3 matrix, and a little Reset button. Push the latter, and then wiggle the offending cable, as much as you like. If you have an intermittent fault, the state of the 3×3 matrix may briefly change (and you might miss it). If it does, the corresponding ‘Intermittent’ light will light up and stay lit until you next press the Reset button. Simples!

If you only have access to one end of a cable, you can test it for short circuits by holding Reset down as you turn the CT100 on.

As if that wasn’t enough, this little box also acts as a Test Tone generator, generating a 1 kHz or 440 Hz tone at +4 dBu, -10 dBV or -50 dBV on any of its outputs that you can use to align the gains and meters on your mixing desk and PA rig, or just generally prove continuity through a system. As a last bonus, while you’re in this mode, you can also check for the presence of phantom power.

All in all? The best review I can give is that I bought one, it lives in my gig bag and if for some inexplicable reason it broke, I’d buy a new one the same day.